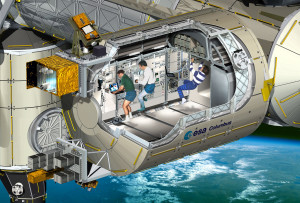 Gutekunst feathers supplies these compression springs to the company with special thermal and force-specific properties Joke man from Pforzheim, in their Accumulators they are used on the ISS. These accumulators ensure the optimal system pressure in the cooling water circuit despite the temperature fluctuations that occur. The batteries are also used in launch vehicles. There, the volume storage system smooths the pressure peaks of the liquid fuel or oxidizer and thus prevents the dreaded POGO effect . POGO vibrations are caused by the break in the mass flow in the missile’s supply lines and may even cause the missile to lose its total amount.

Similar accumulators are used in aircraft as hydraulic energy stores for the rapid actuation of rudders and flaps. Due to the locations where these accumulators are used, the main focus in the design and manufacture of the compression springs is on the constant linear spring constant in the event of large temperature fluctuations.

The requirements of the Witzenmann project managers for the springs were consequently very high: constant material properties at +121 to -156 degrees, minimal deviations for pretensioned and tensioned spring forces, low relaxation despite temperature fluctuations, no settling of the spring; and all of this over ten years of guaranteed service life.

The Material selection At Gutekunst Federn, the spring steel wire 1.4568 according to DIN EN 10270-3 quickly fell into place. This material not only has a large temperature application window of +200 to -200 degrees, but also has a very low one with increasing temperature and tension Relaxation of less than four percent, i.e. the spring constant remains almost linear.

Manufactured in quality grade 1 with 100% testing, the compression spring was first wound longer and then set to the required length so that the spring was not in use Setting behavior shows.

The fact that the compression springs have been in use for over ten years is testament to the optimal design for this application by Gutekunst Federn.

To the companies:
Witzenmann from Pforzheim specializes in the manufacture of flexible pipe elements such as expansion joints, metal bellows, vehicle parts and pipe supports. As a global company with the motto “managing flexibility”, Witzenmann has a very broad range of products for everything to do with piping and is the world market leader in the industry. In 2014 the approximately 3,700 employees of the Witzenmann Group in 24 companies and 19 countries worldwide achieved a turnover of over 520 million euros. Both standardized series and individual product solutions are made. www.witzenmann.de

Gutekunst Federn specializes in the development and manufacture of metal springs and bent wire parts from any desired spring steel wire. In addition to the extensive Stock program with 12,603 spring sizes , Gutekunst Federn manufactures any desired individual metal spring Up to 12 mm wire thickness in small quantities and large series. With 320 employees, the family company, founded in 1964, supplies around 100,000 customers from a wide variety of industries worldwide. Gutekunst Federn, with five branches in Germany and France, is one of the best-known spring manufacturers in Europe. www.federnshop.com